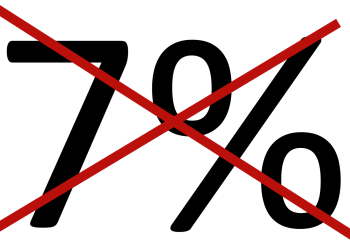 The statistics often quoted are:

Words account for 7% of communication, tone of voice accounts for 38%, and body language accounts for 55% of communication. This attributed to Albert Mehrabian. In his book “Silent Messages” he quotes the findings of his 1967 research. But on his own web site, Mehrabian is obliged to distance himself from these misused statistics.

Mehrabian’s findings are valuable but we need to stop quoting them out of context. From Wikpedia:

In his studies, Mehrabian (1971) comes to two conclusions. Firstly, that there are basically three elements in any face-to-face communication:

tone of voice and

and secondly, the non-verbal elements are particularly important for communicating feelings and attitude, especially when they are incongruent: if words and body language disagree, one tends to believe the body language.

It is emphatically not the case that non-verbal elements in all senses convey the bulk of the message, though this is how his conclusions are frequently quoted.

When delivering a lecture or presentation, for instance, the textual content of the lecture is delivered entirely verbally, but non-verbal cues are very important in conveying the speakers’ attitude towards their words, notably their belief or conviction.

The last paragraph possibly holds the key to successful communication:

“…but non-verbal cues are very important in conveying the speakers’ attitude towards their words, notably their belief or conviction.”

Mehrabian’s research was based on the presentation of one emotional word in a tone that that did not “support” the spoken word. It was determined that the tone had more influence on the listener. A second study used an emotional word played from a tape at the same time as black and white picture contrasting the word was shown to a person.

It is important to remember ONE word was used in isolation. And that the words chosen dealt exclusively with emotion, and it is here that Mehrabian’s findings have undoubted credibility. But in general conversation of formal presentations, the 7%-38%-55% doesn’t hold true.

If the 7%-38%-55% “rule” did hold true, we would be able to watch foreign language films without sub-titles and converse with tourists who do not speak our language with ease.

This is NOT to say that the words chosen to convey a message are 100% important. Certainly not. But the content of any presentation (hence the words used to a large part) is critical. Carefully consider the choice of words and way they are structured by the next speaker who captivates your attention – words and the way they are structured are a critical component of the message and hold your interest all the more when used in conjunction with:

Obvious belief and passion for the subject